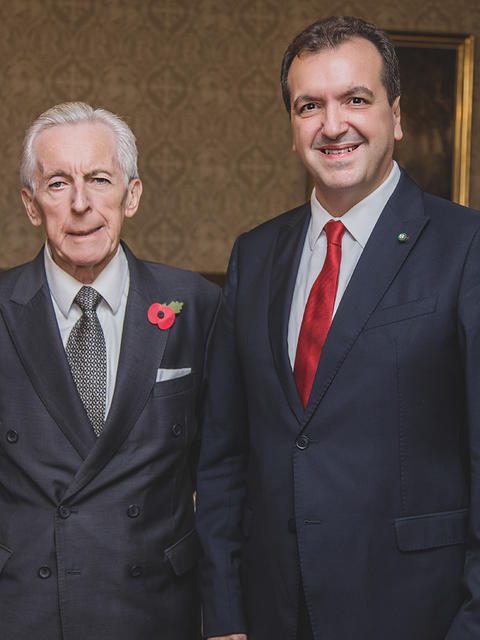 Daniel Brennan, Francesco Sansone
In the House of Lords of the United Kingdom of Great Britain and Northern Ireland, there was a Cenacole organized by VALORE CONSULTING. The guest of honour was sir Daniel Brennan, her Majesty Most Honourable Privy Counsellor.

I’m going to talk about a person with great entrepreneurial spirit, about active and enthusiastic lawyer who celebrated 50 years in that profession and who is still doing it.
Just a few words should be said about the profession of a lawyer and an entrepreneur origin in it. The classical descriptions for an entrepreneur: creativity leading to innovation. Self-belief and hard work leading to being good at what you’re doing and capable of handling risks. Leadership coupled with, in the profession, endurance, as it takes a lot of doing to survive clients, judges, trials.
I want to concentrate on those phrases as, creativity, innovation and leadership. As well as the personal factor. My profession of a lawyer isn’t any different to any as to its basics, honesty, frankness, cooperation with people and above all, doing the right things which agree with moral, professional, intellectual aspects.
I’m going to give you three examples from the past, the present and the future to illustrate those points and to show you that in any walk of life you can display these values.

Many years ago I made a speech at a university in Minnesota about anticorruption and how to attack corruption internationally by using an asset recovery agency as well as lawyers, money chasers, accountants, ex revenue people.
The principal guest on this occasion was Kofi Aannan who agreed with it entirely and helped me to try and get it organised internationally. Governments wouldn’t do it unless private business provided some of the money. Private business wouldn’t do it unless the governments provided the money first. We never got anywhere. It was very disappointing. A lot of countries particularly in Africa couldn’t stomach the idea of paying the agency a fee for getting their money back.
On top of that, we needed whistle blowers, who are very important in anticorruption cases. In the States, for example the whistle blower gets a percentage of whatever is recovered because of his or her evidence. It’s a serious game in the States and you can do that internationally. The real point about informatori corruption cases is not the ones who tell you what happened. It’s the ones working for the crooks who find out from the government or the prosecution agency what’s going on. The informatori inside the system are much more significant than the ones outside working for the crook or knowing about the crook.
It’s been over 10 years since that case and last year to my surprise, I’m approached by some people from an Eastern European country where the corruption due to oligarchs has been enormous. They want to have a go at this kind of assets recovery agency. I didn’t use the word ‘patience’ in all of those qualities, but I think for the good entrepreneur in life if you may have at the back of your mind a tremendous idea, never let it g

The future. I go to China a lot. During my visits I’ve done a lot doing legal things about the Belt and Road Initiative which is for the future. I have been amazed by the difference in cultural attitude, intellectual approach of Asia compared to Europe and America. We ran the world in the 20th century, much of the 19th. In this century it’s got to be China, India.
Nearly 70 countries in the Belt and Road program about two-thirds of the world’s population and about one-third of the world’s present GDP before the project even starts. They say we should finish the infrastructure by 2050 and that things should be going well by 3000. Do we think about that now? Do we have lawyers, businessmen, entrepreneurs who think about perspectives further than the next year or two? An entrepreneur has got to be somebody who should be thinking about tomorrow, not just about today and not just yesterday.

In conclusion, I would like to talk how important it is at hard times to remember about such things as reputation and dignity which shall be the core of all your purposes.
You remember I told you about Semtex being the trigger explosive for these car bombs the IRA used? Reagan bombed Tripoli in the ‘80s because the Libyans attacked some American soldiers in a club in Berlin.
According to Gaddafi, the Reagan bombing killed Gaddafi’s daughter who was living in a house outside Tripoli. He started supplying Semtex to the IRA and other terrorist groups as a revenge step against the West. Nearly most of the bombings were triggered by Semtex supplied by Gaddafi. In 2008 I and some American lawyers started that case. In America, under the alien tort statute you can sue a person for a tort or delict committed outside of America even if it’s completely contrary to international standards of behaviour.
Before I went to Libya, I visited America because Bush was going to do a deal with Gaddafi, “I’ll get you off the terrorist list, Congress will agree if you put up a couple of million dollars compensation for American victims of Libyan terrorism.” Some of you may remember the bombing outside Harrods in London. It killed some Brits and some Americans standing next to each other. So I said, “We are going to the States and have a talk with with Mr.Bush’s State Department”. That was what we did. We told the Americans, “Lybia is attacking us. Our citizens get killed together. Let’s have a fund that covers the Brits as well as the Americans”. I got absolutely nowhere. The Americans set up their fund, took Libya off their terrorist list and the Brits were left where they were before.
The year after I went to Libya with some British Parliamentarians and tried to negotiate a deal. The end of it was quite amusing because the man I was dealing with spoke perfect English but insisted on talking Arabic because Gaddafi’s scribe.. Got that? Scribe.
A man came to write down what this man was saying in Arabic so he could go back and tell Gaddafi what he’d said to me. Every time I asked something he said no. At the end of a couple of days I said to the British ambassador, “I’ll bet you 20 pounds I can get this guy to say yes.” “Done. Here’s 20 if you can do it.” I go into the last meeting. I say to him in English, “Minister, if I’ve understood the Libyan position correctly, one, I describe it…”. I went through all the issues of out talk and got “no” answers to all of them. At the end I said, “Have I got all that right? You said no to everything?” He said, “Yes.” The ambassador had to give me 20 pounds.
It was the first week of November 2009 just before Armistice Day, which will be 100 years from the end of the first war and 70 for the second war. There was an ex-soldier presented in one of our meetings who addressed us on the last day, “Let’s go to the military cemetery in the countryside just near Tripoli.” Here we are two Lords and MPs standing in an empty graveyard which is beautifully kept. Lots of little white crosses, flowers, completely empty of people except us. The soldier goes up to the cross in the middle.
In England, we have a famous phrase on Armistice Day when we think about the dead. It applies to the dead of every country whichever side. It goes like this, “They shall grow not old as we who are left will grow old. Age shall not weary them nor the years condemn. At the going down of the sun and in the morning we will remember them,” that soldier said in this empty graveyard in the suburbs of Tripoli. My closing comment: dignity of purpose. Dignity of treatment. Dignity of gratitude for an entrepreneur and for you as a person. 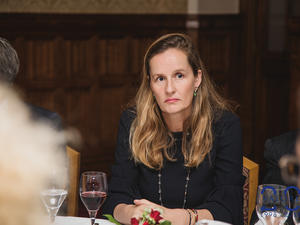 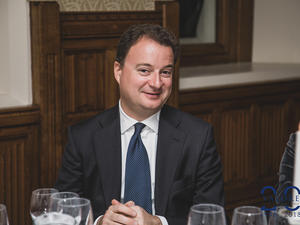 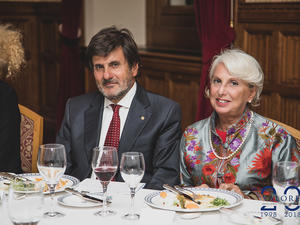 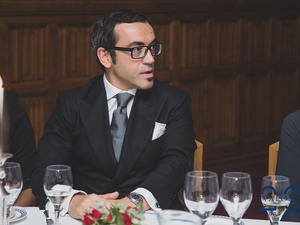 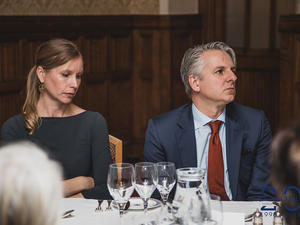 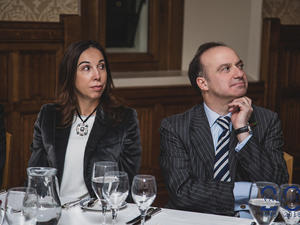 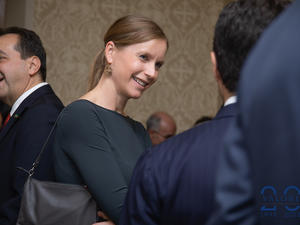 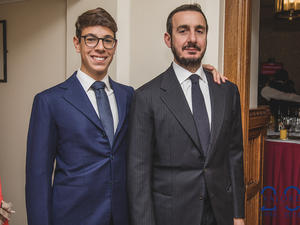 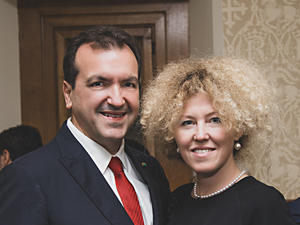